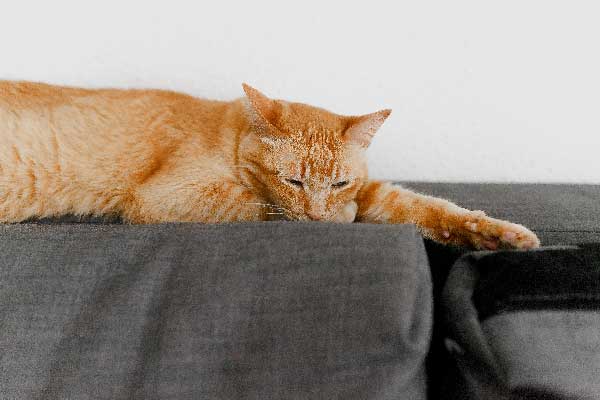 Some new tenants had just started moving into their new home when they discovered the previous tenants had left a cat behind in the house.  The house had been vacant for about a week.  Feeling sorry for the cat and because they could not keep it themselves, the new tenants brought the cat into the shelter where I was volunteering.  He was a long haired ginger boy and was placed into Cat Quarantine where I was working that day.  He was completely traumatised and huddled himself into the bed I made for him, so I offered him some food and water as well as some much needed Reiki. During the treatment it seemed to me he could not see properly but what he did show me was a pretty little girl about 5-7 years old.  They were devoted to one another and I sensed the little girl was in as much distress as this Ginger Boy was at their loss.

The veterinary staff gave him the once over and confirmed what I had thought, he was indeed almost completely blind.  There was little hope of him settling in to life within the shelter and being adopted.  Who would want a blind cat.  But I discussed with the staff what he had shared with me through Reiki and it was decided to wait a couple of days to see if his family came looking for him, as he was indeed a handsome cat.

The following week when I returned to the shelter I was happily told that a little girl and her family came and collected their Ginger Boy. The little girl and Ginger Boy were happily reunited.  They had grown up together and to the little girl, he was not blind, but a loving cat, they adored one another.  We never found out why the cat was left alone in the house though.>